The West Perth Congregation began in 1896 as a mission outreach of St Andrew’s Presbyterian Church in Perth City.  A mission hall was established on land bounded by Wellington, Havelock and Murray Streets, followed by a church in 1897. With rapid growth, the Church became a separate charge in 1898.

Reverend Daniel Ross was inducted as Minister on 2 April 1912. As membership rose above 200, the congregation sought and received authority to sell the original site in Havelock Street.  Land was purchased at the corner of Hay and Colin Street on 22 October 1912 from the Catholic Church for £1,850 plus charges.  A few months later, the original Havelock Street property was sold to the Catholic Church for £4,000. A hall opened on the new site in 1913 and a new church, designed by architect, James Hine and built by Robert Alexander Gamble, with a foundation stone laid by Lord John Forrest, opened in 1917. Gamble was appointed to construct the church for a fee of £3,605, with the final cost, including furnishings amounting to £4,147.

The old foundation stone from the Havelock Street church was placed in the eastern wall of the new Church. In July 1918, two months after the death of Reverend Ross, the church was re-named Ross Memorial Church. A memorial tablet was placed in the east transept of the church. Of Reverend Ross, the Memorial Minute in the Session book reads, "The Session desire to place on record their sense of great loss occasioned by the death of the late beloved minister of the Church. They believe that he was a 'man after God's own heart,' whose single aim and purpose was to fulfil God's will." 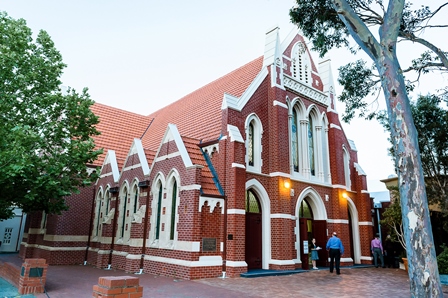 This attractive Federation-Gothic revival red brick and sandstone building has stood as a central architectural feature in West Perth, largely unchanged since 1917.  An excerpt from the 75th anniversary booklet of October 1973 reads, "We of this present day and age pray with all our hearts, that the pews will be filled with godly men, women and children, and that fellowship with one another, and devotion to Jesus Christ our Lord, will make this hallowed, honoured house of worship a place to be loved, and where our God will be served, following the examples of the pioneers and those who came after them."

Click here to view a gallery of photographs from the archive.